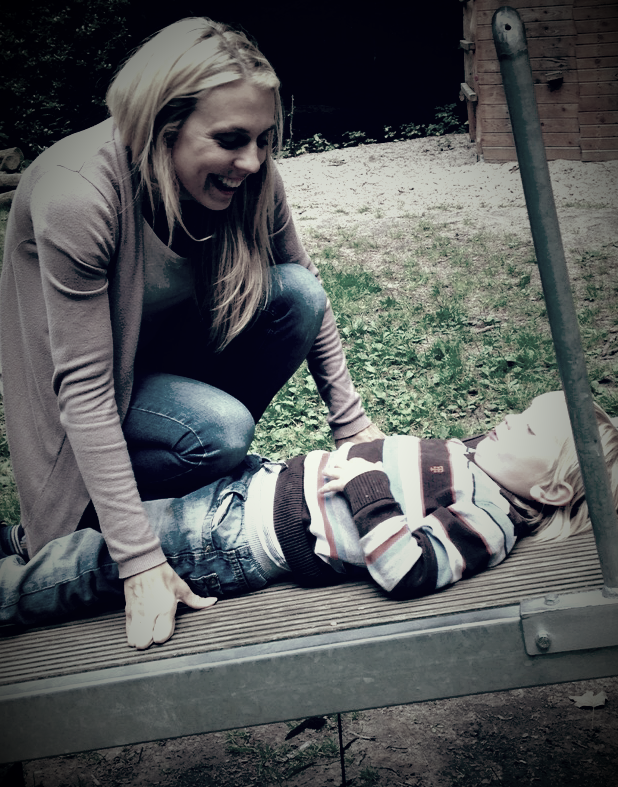 In December 2011 my life just stopped for a short while and when it continued everything was different. From one minute to the other.

I have very detailed memories regarding that moment. I went to the doctor in the morning – full of anticipation. I was 6 month pregnant. After the visit at the doctor I planned to do my Christmas shopping. I didn’t know at that moment that Christmas would be canceled that year and that nothing would be the same as before anymore. I was still in my old world in which everything was okay.

At the latest when the doctor went out to get a colleague I felt that something was not right. In the beginning I still thought that it just might be a 6th finger or that one ear might be a little bit too big. „You should think about an abortion because your child wont be viable“. For a moment I thought that I did not understand the doctor correctly because we were talking in French (I still lived in Brussels). But I did get him right. At that minute my life just stopped for a moment. My child wont be healthy? I was always beyond doubt that my child will be in good shape and healthy. Everybody gets healthy children. I did not drink neither did I smoke and I am healthy. These were my first thoughts. Your child just can‘t be sick, that is not possible. Now I am thinking that that was pretentious to think. Now I know how thankful you have to be if you expect an healthy child.

Abortion. I left the doctor that day with that advice. I went home, to my apartment in which the baby room was already fully furnished. The doctor just gave me some broken bits of information: left half of the heart, deformation of the heart, too big right half of the heart.I sat down at the computer and did some research myself. I shortly got Hypoplastic Left Heart Syndrome (HLHS) as an answer.  One week later (7 days, 168 hours, 10080 minutes) I had an appointment at the hospital and my suspicion was correct: Hypoplastic Left Heart Syndrome (HLHS), 5% chance of survival. I left the hospital with that result and again the advice of abortion.

Abortion. That was never an option for me. I did not even think about it for one minute. I just couldn’t image it. With the final diagnosis I sat down again at the computer and looked for hospitals which were able to treat that heart disease. The hospital in Kiel was my first choice and I made an appointment right away. In Kiel my hopes went up again because they could operate that kind of heart disease. Since I still lived in Brussels and I was insured in Belgium I had to organise a few things so that my unborn child could get treatment in another country, in Germany. When I received the acceptance letter it felt like a stone had been fallen from my heart. It helped me in the beginning to organize these things because it distracted me for a while and I had to function. I knew that our  journey wouldn’t be easy and that some operations were waiting for us but there was hope. Hope. I really learned to appreciate that word during that time.

I had hope when I bought the first setting of clothes and the first music box for Evan that he could wear them and listen to it. Every morning I woke up with hope and every night I went to bed with hope.

When I was asked:“Boy or Girl? Ah, it doesn’t matter. Main thing is that the baby is healthy“, I started crying immediately. After a while I just nodded and kept my thoughts to myself. To be pregnant and not knowing if you are able to hold your baby alive in your arms is just indescribable. As a mother you have so many wishes and hopes for your unborn child. Every day I begged, plead and prayed that Evan shall live. Fear was next to hope my permanent companion at that time.

But I learned something else during that time: Humbleness. Humbleness for life. I have learned that it is not self-evident to have an healthy child and I also learned that not all parents get healthy children – as I was assuming before. During Evan’s hospital stay I lived in the Ronald McDonald Haus Kiel where I met a lot of parents who shared the same destiny as I did. The Ronald McDonald Haus became a home away from home during that time and the conversations with other concerned parents helped me and bolstered me up.

If I could turn back the time I would do everything exactly the way I did before. Every day when I look into Evan’s eyes and see the joy and living will I know that it was worth fighting for. Evan lives up for his name: Little brave warrior!

The heart must submit itself courageously
to life’s call without a hint of grief,
A magic dwells in each beginning,
protecting us, telling us how to live.
(Hermann Hesse, Steps).